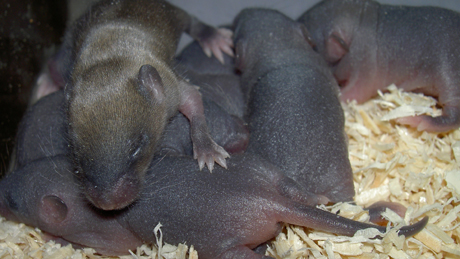 Females tend to be more willing to raise their offspring cooperatively if they have similar litter sizes. (Picture: UZH)

Four people meet for dinner in a restaurant and split the check four ways. Anyone who ordered more or something more expensive than the others gains an advantage from the situation. Social dilemmas like this one also occur in animals – such as during communal offspring care. Biologists from the University of Zurich studied how house mice are able to prevent social dilemmas and still cooperate. The results of their study reveal that house mice adjust their willingness to cooperate to the expected pay-off.

Female house mice can raise their young with other females in a communal nest. Two or several females pool their litters in one nest and jointly care for all offspring, even if litters differ by a few days in age. As the females cannot tell apart between their own young and the offspring of the other females, they indiscriminately nurse all pups in the communal nest. If one female has more pups than the others, she invests the same into nursing but weans more young and therefore has an advantage.

In order to avoid such inequality, house mice could either only cooperate with a female who has a similar litter size, or alternatively, the female with the smaller litter might kill some of the other females’ young. However, as the females cannot identify their own offspring once they initiated cooperation, they would have to kill the other females’ pups before they give birth themselves. In order to see how the animals behave in such a situation, the UZH researchers observed wild house mice in a laboratory experiment.

The scientists kept groups of two sisters together with a male and let them reproduce. Using a naturally occurring genetic element, they were able to manipulate the females’ litter sizes before they gave birth. In the experimental group, one of the females had a reduced litter size due to this genetic element – the two sisters therefore had unequal litter sizes at birth. In the control group the two sisters had similar litter sizes. “We observed that the females in the experimental group with unequal litter sizes were less cooperative. They formed fewer communal nests than females in the control group,” explains the study’s first author Manuela Ferrari.

From this, the PhD student from the Department of Evolutionary Biology and Environmental Studies at the University of Zurich concludes that the females adjust their willingness to cooperate to the risk of conflict and are more willing to raise their young communally if they have similar litter sizes at birth. “This enables them to lower their risk of being exploited,” says Ferrari.

However, the scientists also observed that some offspring from the first female to deliver were killed, regardless of whether the females had similar or unequal litter sizes. Females that gave birth second were therefore able to improve the conditions in their favor and often had an advantage.

Manuela Ferrari, Anna K. Lindholm and Barbara König. A reduced propensity to cooperate under enhanced exploitation risk in a social manner. Proceedings of the Royal Society B. May 11, 2016. doi: 10.1098/rspb.2016.0068