Chairman of the Department of Economics 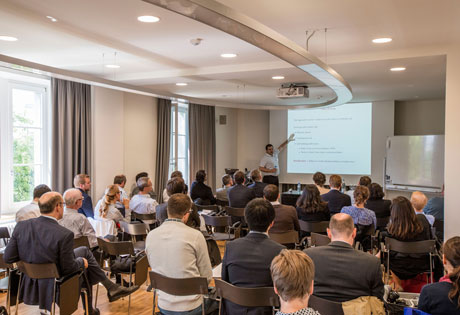 The University of Zurich has proven that it can meet several US elite universities at eye level when it comes to recruiting the best talents. Six out of the seven new professorships at the Department of Economics were working at Stanford, Harvard, or Chicago before coming to Zurich. The appointments include three full professorships and four assistant professorships.

Thanks to this substantial high-qualitative growth, the Department of Economics will have a further advantage in international competition and has moved a giant step closer to achieving its goal of becoming one of the world’s leading center for research and education in economics. This progress – from which both the Department of Economics and the University of Zurich equally benefit – is largely due to the support from the UBS Center of Economics in Society.

Students in particular will benefit from the newly appointed professors, since they will be taught by globally leading experts on current research topics and methods – obtaining knowledge that later can be implemented on the job. Department chairman Rainer Winkelmann adds that the Department plans to hire five more professors in the next two years, in order to further strengthen Zurich’s position as an international leader in economics.

Prof. Lorenzo Casaburi has been appointed Assistant Professor in Development Economics as of September 1, 2016. Before he joined the Department of Economics, he was a Postdoctoral Fellow at the Stanford Institute for Economic Policy Research (SIEPR), Stanford University. His research focuses on two main agendas in Development Economics: agricultural markets in Sub-Saharan Africa and state capacity, with an emphasis on tax enforcement.

Prof. Guilherme Lichand has been appointed Assistant Professor for Child Well-Being and Development as of September 1, 2016. Before joining the Department of Economics, he obtained his PhD in Political Economy and Government at Harvard University. His research interests lie at the intersection of Development Economics, Political Economy, and Behavioral Economics.

Prof. Ralph Ossa has been appointed to the Professorship in Economics of Globalization and Emerging Markets, endowed by the UBS Center, per January 1, 2017. Professor Ossa is currently Associate Professor of Economics and Neubauer Family Faculty Fellow at the University of Chicago Booth School of Business. His research focuses on international trade, economic geography, and economic development.

Prof. Dina D. Pomeranz was appointed to the Assistant Professorship in Microeconomics, endowed by the UBS Center, starting September 2017, and has been a visiting professor at the Department since August 1, 2016. Before joining the Department, she held a position as Assistant Professor at the Harvard Business School at Harvard University. Her research focuses on public policies towards firms and entrepreneurs in developing countries. She has conducted large-scale randomized field experiments on tax evasion by firms and the determinants and impacts of formal savings for low-income micro-entrepreneurs.

Prof. Florian Scheuer has been appointed to the Professorship in Economics of Institutions, endowed by the UBS Center, per January 1, 2017. Professor Scheuer is currently Assistant Professor at Stanford University and has been a visiting assistant professor at Harvard University and UC Berkeley. His research focuses on public finance, taxation, competitive markets, and game theory.

Prof. David Yanazigawa-Drott has been appointed Professor for Development and Emerging Markets per September 1, 2016. Before joining the University of Zurich, he was an Associate Professor of Public Policy at the Harvard Kennedy School of Harvard University. His research interests include economic development and political economy, with special focus on civil conflict, health, information, and mass media. Professor Yanagizawa-Drott will be affiliated with the UBS Center.