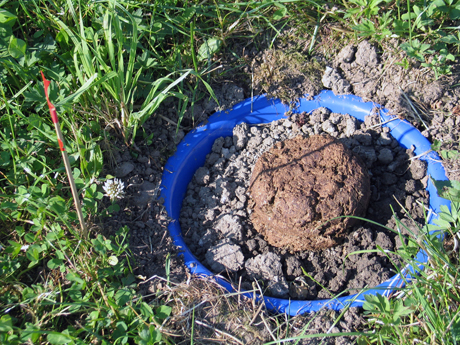 Dung pat with organisms that break down dung. (Image: UZH)

Livestock medications can impair beneficial organisms that break down dung. Too high a dosage of ivermectin, a common drug against parasites, harms coprophilous organisms, for instance. The toxicity of new livestock medications therefore needs to be verified in ecotoxicological tests with individual animal species such as the common yellow dung fly, the barn fly or a dung beetle. This involves determining the lethal dose leading to the death of half the maggots (LD50 test). However, sensitivity to toxic substances is known to vary significantly even among closely related coprophilous organisms, which begs the question as to how representative the reaction of any individual animal species actually is in such laboratory tests. After all, there is a high risk that more sensitive species will continue to be harmed by the substance, jeopardizing key ecosystem functions in the long run.

An international research group including UZH evolutionary biologist Wolf Blanckenhorn recently proposed extending the testing scheme to a representative selection of all organisms that break down dung, ideally in their natural environment. The scientists now presented a successful and more comprehensive higher-tier ecotoxicological field test. Their study provides important insights into minimizing the risks of drug residues in nature.

For their feasibility study, the scientists worked on cattle pastures in the Canadian Prairie and the agricultural landscapes of southern France, the Netherlands and Switzerland – four locations with very different climatic conditions. On these pastures, they distributed dung pats with different concentrations of ivermectin. “As expected, the overall number and diversity of dung beetles, dung flies and parasitoid wasps decreased as the ivermectin concentration increased,” explains Blanckenhorn. However, a number of species also proved to be resistant: earthworms and springtails living in the ground underneath the cowpats were not notably affected, and a parallel test ultimately revealed that dung degradation was not significantly impaired. “Evidently, beneficial organisms not affected as much by the drug, such as earthworms, were apparently able to compensate for the loss of other organisms,” sums up Blanckenhorn.

A basis for decision makers and licensing authorities

Despite diverse environmental conditions and methodological details, the results were very similar and reproducible in all four habitats. “Our field approach was therefore a success and in principle can be recommended. The regulation authorities responsible, such as the European Medicines Agency EMA, now have to decide whether this more conclusive yet more complex test should be required in the future,” says Blanckenhorn. The amount of effort involved in determining the numerous dung organisms is tremendous and impossible without expert biological knowledge. “Classifying species via so-called DNA barcoding, based on each organism’s unique genetic fingerprint, is possible in principle and will probably be more cost-effective in the future. However, this approach requires the establishment of a complete database for coprophilous organisms, which does not yet exist,” concludes the scientist.

Scientists discovered and refined ivermectin in Japan in the mid-1970s, eventually winning the Nobel Prize in Medicine in 2015. The drug has been used to cure river blindness, scabies and roundworms in the gut of humans, as well as parasites in livestock and pets.

Chemically ivermectin belongs to the avermectins, which generally interfere with ion channel transport through the cell membrane and thus the molting of pest organisms. If the ivermectin dosage is too high and excreted in the feces of treated livestock, the drug also kills beneficial organisms that break down dung. This has a negative impact on the functioning of the entire ecosystem: in extreme cases, the dung is no longer degraded at all and the pasture cannot be used any further.