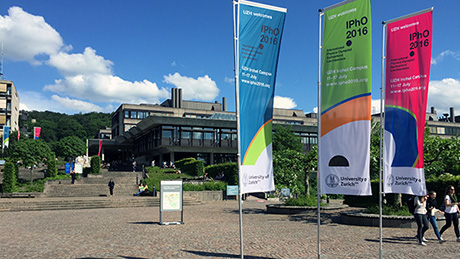 The University of Zurich hosts the IPhO 2016 at Irchel Campus. (Image: UZH)

For the first time ever, the International Physics Olympiad will be held in Switzerland. The venue is the University of Zurich – more precisely: The Department of Physics at Irchel Campus. “We are excited about the event and of course very proud to be partner and host of the IPhO 2016,” says Michael O. Hengartner, President of the University of Zurich. “Hosting over 400 motivated and talented high school students at the Physics Olympiad is completely in line with our goals of promoting the natural sciences and attracting the brightest minds from all over the world.”

Getting students excited about science

The large-scale international event is being organized by co-partners University of Zurich and the Education Office of Liechtenstein, in cooperation with the associations Swiss Physics Olympiad (SwissPhO) and Swiss Scientific Olympiads (ASSO). Irène Steinegger Meier, co-head of ASSO emphasizes that, “The goal of science Olympiads is to get young people excited about physics and the natural sciences at an early stage. After all, the decision on what to study at university is often made in high school at the latest. But having fun and sharing an unforgettable experience with peers from all over the world is equally important for the students. It is an experience that will last a lifetime.”

Overall, 84 countries from every corner of the globe are represented with a team of up to five students; all participants are under the age of twenty. The competitors represent the top physics students in their country, having won the respective national qualification for the international final in Zurich. The two host countries, Switzerland and Liechtenstein, are sending a team of five and three high school students, respectively.

The competition begins in earnest on 12 and 14 July: During a five-hour experimental exam and another five-hour theoretical test, the students will apply their knowledge and skills to solve problems that go far beyond what they have learned at school. They will also need plenty of creativity, resourcefulness, and endurance to tackle tough questions about mechanics, thermodynamics, electromagnetism, optics, the theory of relativity, and quantum mechanics. But the exams aren't just challenging to the students: It took a team of almost 20 experts simply to design the practical and theoretical parts of the competition. It is critical that the test questions, which are reviewed by 165 country delegates and translated into 50 languages, are demanding yet also manageable. And, naturally, questions from the previous 46 International Physics Olympiads can't be repeated.

The IPhO 2016 kicks off with an Opening Event at UZH's Irchel Campus on 11 July at 10:00 am. Some 950 physics enthusiasts will be at the big event; in addition to the competitors themselves, attendees include the chaperones, observers and visitors from abroad, UZH physicists, organizers, team leaders, and over 100 volunteers.

Social and cultural events round out the program

In addition to the actual competition, the competitors and guests from all over the world will enjoy a variety of events, activities, and excursions, including a tour of the city of Zurich, a visit to the Paul Scherrer Institute in nearby Villigen, trips to the Rigi mountain and to the Principality of Liechtenstein, topped off by an excursion to Geneva to visit the museum of the International Red Cross and, naturally, CERN. The Midterm Party on 14 July is a good opportunity for the students to get to know each other and test their mettle in a completely different kind of competition – be it milking cows or playing the “Alphorn.”

The event winds down with a Closing Ceremony on 17 July at the Zurich Tonhalle, where the champions will be awarded their gold, silver, and bronze medals. No doubt many of these bright young minds will go on to study physics or another subject in science and embark on a promising career in the private sector, in research, or in management.