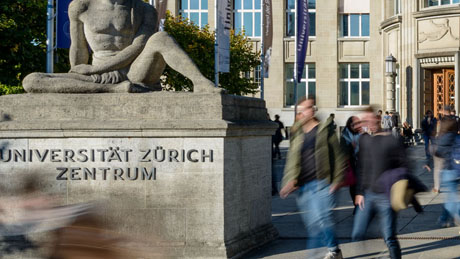 “MINT” subjects have seen an increase of 22 percent in students. (Image: Stefan Walter)

There are currently 25,358 students enrolled at UZH, which corresponds to the high numbers of the past years and confirms the University of Zurich's standing as Switzerland's largest university. Approximately 40 percent of the students are from the Canton of Zurich; 16 percent are from abroad – mainly from neighboring countries Germany, Italy, and Austria, followed by students from China. For the first time, over 5,000 PhD candidates are enrolled at UZH.

In the fall semester 2015, the Faculty of Arts and Social Sciences registered the highest number of students (10,269), followed by the Faculty of Science (3,883), the Faculty of Law and the Facully of Business, Economics and Informatics (3, 626 and 3,435, respectively), and the Faculty of Medicine (3,077). Especially the field of medicine and the so-called “MINT” subjects have seen an increase of 20 and 22 percent, respectively, over the past five years. Despite the overall increase in student numbers, the student-to-instructor ratio has significantly improved at all faculties in the past years. The trend has, however, necessitated investments in expensive infrastructure, making the related degree programs costly.

In 2015, the University of Zurich targeted a total revenue of 1,377 million francs, which represents a year-on-year increase of two percent. Funding for projects increased by 11 percent to 303 million francs, which demonstrates that UZH researchers are successful in attracting third-party funds from Swiss and European funding institutions. “We have costs under control. For instance, we were able to reduce material costs by two percent, down to 454 million francs," said Stefan Schnyder, Director of Finances, Human Resources and Infrastructure.

To strengthen the University's ability to act independently and to continue to launch strategic initiatives, UZH has planned average annual spending cuts of 13 million francs for the years 2017 to 2019. The cuts are the result of the reduction in funding from the Canton of Zurich (four million francs), the stagnation in federal funding, and the anticipated increase in employer contributions to the employee pension fund BVK (six million francs). “It remains our goal – despite the spending cuts – to further develop Zurich’s leading position as a hub of academic excellence and innovation,” said Michael Hengartner.

Full Participation in Horizon 2020 is Essential

Due to the cost-cutting measures of the canton and the federal government, the focus is increasingly shifting to another important source of revenue: Third-party funding. After the Swiss National Science Foundation, the EU Research Framework Programme is the most significant source of funding for Swiss higher education institutions. In the wake of the yes-vote on the anti-mass-immigration initiative, Switzerland was relegated to partial-associate status in the new EU Horizon 2020 program – which has already led to a major loss in funding. “It not only poses a risk to UZH; Switzerland as a place of education and research stands to lose a great deal,” as UZH President Michael Hengartner emphasized. He appealed to politicians to ratify the protocol extending the free movement of persons to Croatia, and to thereby guarantee the definitive and full participation of Switzerland in European exchange and research programs.

From 11 to 17 July 2016, the University of Zurich is hosting the International Physics Olympiad (IPhO). 450 high school students from 90 different countries will participate in diverse competitions and excursions – and explore the fascinating world of physics far beyond their textbook knowledge from school. The overarching aim is to promote dialogue between young people, teachers, and researchers, and to thereby foster junior scholars.

UZH Opening its Doors for the Art Biennial Manifesta 11

For four weeks, the main building of the University of Zurich will be transformed into an experimental space for scholarly and artistic exploration as part of the Biennial Manifesta 11. UZH is hosting its own parallel event, “Transactions,” which explores the complex interrelationships between art and research. The event will be held in and behind the main building. The University is also offering other institutions and artists space to present their Manifesta 11 projects.