(JPG, 3.11 MB) Pavillon on the terrace outside the university at Künstlergasse 12 (Image: UZH / Caspar Thürler)

(JPG, 2.73 MB) How investments influence our landscape - a study of the Department of Evolutionary Biology and Environmental Studies (Image: UZH / Caspar Thürler) 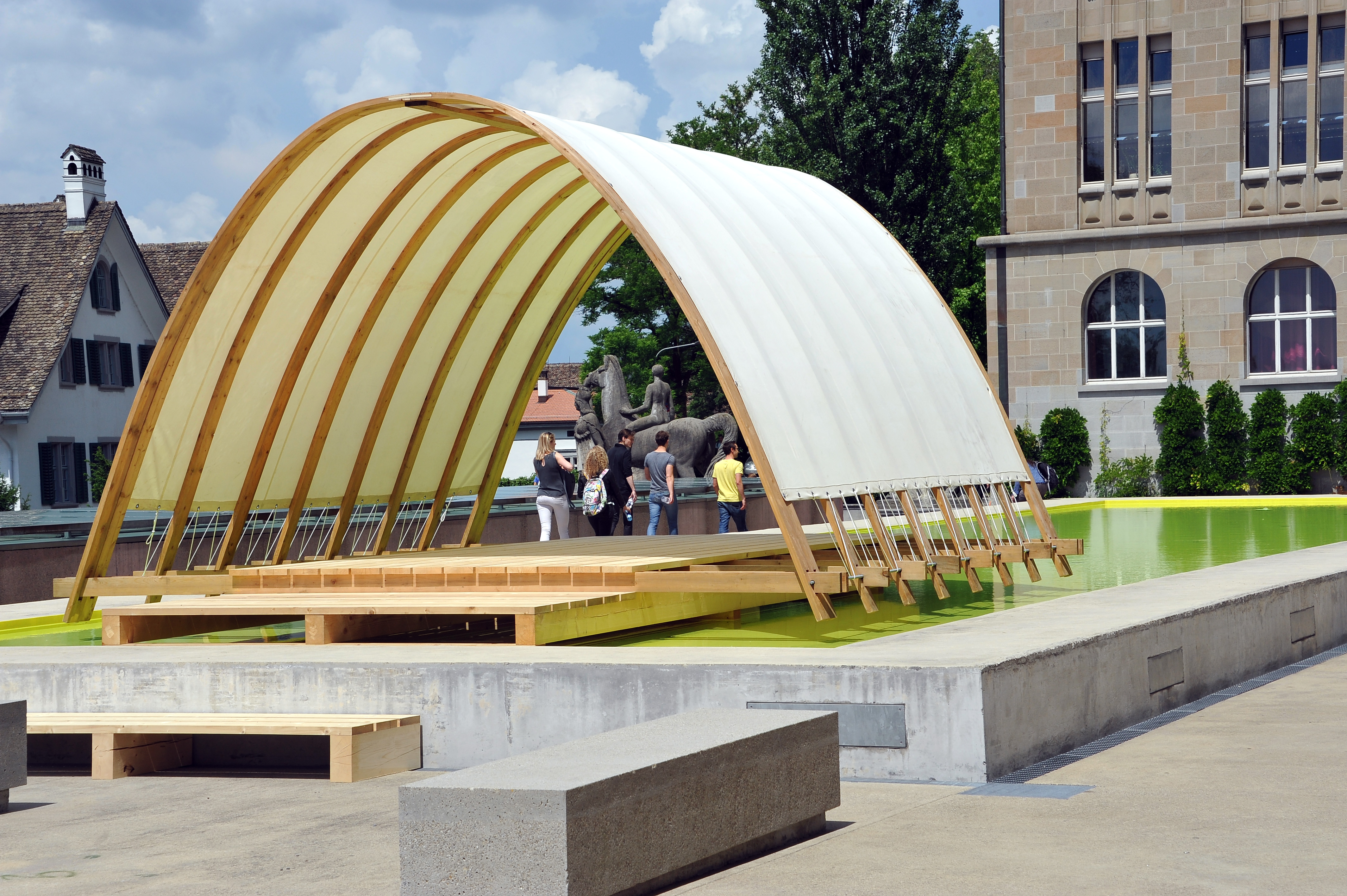 Numerous events will take place on the terrace outside the university at Künstlergasse 12. Image UZH / Caspar Türler

Money, happiness, health and justice – topics that concern us all. Echoing Manifesta’s theme “What people do for money”, the exhibition Transactions in the atrium at the University of Zurich unites more than 30 artists and budding young researchers.

As a place of curiosity, analysis and knowledge, the University of Zurich makes a sizeable contribution towards understanding the world. Economists, for instance, study how markets, money, work and personal decisions behave together. Psychologists research the link between work and life satisfaction while medical researchers ask about the impact on health. And ethnologists, law scholars and ethicists focus on the global distribution of money and fairness.

Exchange of artistic and scientific mind-sets

For Transactions, some of the scientists involved are working with artists for the first time. They have created artistic installations that arouse curiosity and make the beholders laugh or give them food for thought. Together with works by internationally renowned artists such as Richard Ibghy & Marilou Lemmens, Niklas Nitschke & Vadim Zakharov or Studio Camp, a stimulating transaction between artistic and scientific ways of seeing and thinking has emerged on the following topics:

Money can presumably be exchanged for everything. In their controversial film About negotiation, the Zurich-based artist duo Baltensperger+Siepert asks what is more important: money or an emotional connection? At the same time, in their live experiment “What do YOU do for money?” researchers from the Department of Banking and Finance at the University of Zurich confront visitors with the question as to how money influences their decisions. While the artist Rosalie Schweiker reads the visitors’ fortunes from tarot cards for a small fee, ethnologist Stefan Leins analyzes what the success of financial analysts has to do with good story-telling. And the Canadian artist duo Richard Ibghy & Marilou Lemmens calls supposedly objective economic statistics into question with larger-than-life diagrams.

Happiness is not necessarily based on professional success. Psychologist Anja Lehmann shows that people in the volunteer fire brigade perceive their lives as more fulfilled than professional firefighters. The films by Julika Rudelius examine the supposed happiness triggered by wealth and sometimes absurd rituals. And the two internationally renowned artists Niklas Nitschke and Vadim Zakharov even go as far as to want to sell Zurich’s public tangible happiness in a fringe region of Germany – with a “money back guarantee”.

Health in the workplace is frequently coupled with an increase in efficiency. Historian Brigitta Bernet is interested in the psychological effects of the work environment while the mutated office furniture Fit before Purpose by artist Valentina Stieger is an amusing commentary on the ergonomic normalization of work. Luc Smolders from the Vetsuisse Faculty is researching spinal disk degeneration in dogs, realized in an ambiguous installation by the artist entitled Never-Ending Break.

Fairness is fundamental for economic activities. Economic ethicist Marianthe Stavridou is researching the rights and economic prospects for refugees in Switzerland, political geographer Stephan Hochleithner the living conditions of internally displaced people in the Congo. The only option left for the displaced is often to sell their bodies – artistically realized with a (waiting) bench, where the body’s imprint remains visible for a long time.

The walk-in installation Sounds of Science created especially for the exhibition in the atrium by Basel sound artist Fritz Hauser produces quiet and louder sounds. Hauser listened out for noises in the university’s laboratories and work areas before combining them into a concert of sounds that keeps recomposing itself. As a guest on the roof garden of the University of Zurich’s canteen, Simon Heusser found the inspiration to put together Paradise Retreats for relaxation. And in the lecture theaters, researchers and artists also invite visitors to panel discussions, as well as the Schweizerische Institut für Kunstwissenschaft (SIK-ISEA) or the Translation House Looren, which offers live literary translations.

Every day, fresh pasta will be prepared on the terrace outside the university at Künstlergasse 12. A cocktail bar and a concert stage will also be set up. And at the weekends, there will be brunches and children’s programs with screen-printing, origami and a mobile museum.

The exhibition is realized by UZH’s Graduate Campus with funding from the Stiftung Mercator Schweiz.

There will be numerous events on the terrace outside the university at Künstlergasse 12 as well as in the lecture theaters.