(jpg, 2.07 MB) Electrochemistry in a drop: Superposition of seven dynamic contact angle measurements of a drop of water on a surface; diameter of vertical tube capillary 0.85 mm. (Image: UZH) 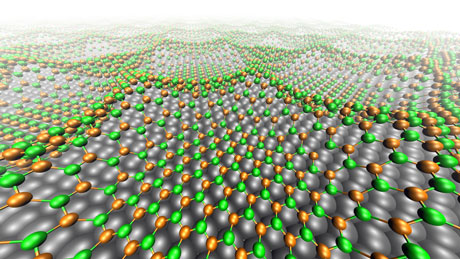 How can a gecko move across a ceiling upside down? Two mechanisms are responsible: Adhesion via billions of extremely fine hairs on its feet, which enable it to stick to ceilings and walls. And as soon as the gecko moves, it relies on stiction. However, any change of adhesion and stiction at macroscopic level is expressed on the nanometer scale through the change in the forces exerted between atoms and molecules.

How a drop of water touches a honeycomb structure

An international team of researchers headed by Thomas Greber from the University of Zurich’s Physik-Institut succeeded in changing the manner in which a drop of liquid adheres to a surface by altering the electric voltage applied to a water drop. The surface upon which the drop lies consists of a material known as nanomesh, a single boron nitride layer on metallic rhodium. The structure is shaped like honeycomb with a comb depth of 0.1 nanometers and comb-comb distance of 3.2 nanometers.

Macroscopically, the change in electrical voltage is expressed in the change of the contact angle between the drop and the nanomesh surface. The contact or wetting angle refers to the angle that a drop of liquid assumes with respect to the surface of a solid. This angle can be measured with the aid of backlit photographs.

“To understand and control the interplay between the macro and the nano-world is the real challenge in nanoscience,” stresses Greber. After all, six orders of magnitude need to be bridged – from millimeters in length (10-3 m) to nanometers (10-9 m); that’s a factor of one million. “Our model system of the electrically switchable nanomesh and a drop’s observable contact angle enables us to access the fundamental phenomenon of the friction of liquids on surfaces more precisely. This should help us solve problems that crop up during lubrication more effectively, for instance.” The research project actually appears on the cover of the latest issue of the renowned journal Nature.

On the one hand, the new system is interesting for biology. Applying this effect should make it possible to control the adhesion and movement of cells. Aspects such as cell migration or the formation of complex, multicellular structures with new scientific approaches might be researched as a result. On the other hand, technological applications such as capillary pumps, where the capillary height can be controlled via electrical voltage, or micro-capillaries, where the flow resistance can be controlled, are also conceivable. 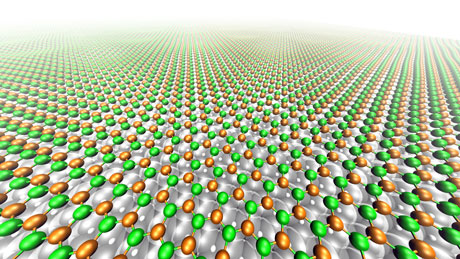 The research results were achieved within the scope of the Sinergia Program of the Swiss National Science Foundation (SNSF). The SNSF uses this instrument to promote the collaboration between several research groups, which conduct research across disciplines with the prospect of ground-breaking results. Besides the University of Zurich, the Katholieke Universiteit Leuven, Vienna University of Technology and Empa were also involved.