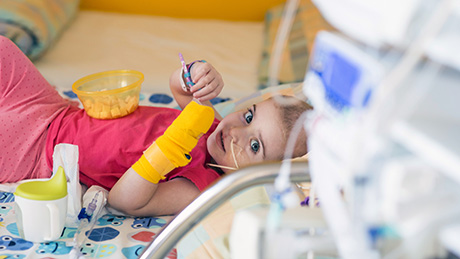 ALL stems from malignant transformed precursor lymphocytes, the blood’s defense cells. Nowadays, four out of five young leukemia patients can be treated successfully with aggressive chemotherapy. However, this ostensibly positive record in pediatric oncology is tarnished by the fact that the cancer cells develop a resistance to the drugs in around 20 percent of cases. As their chances of recovery are slim, medicine is urgently seeking new treatment options for these patients.

Chemotherapeutic drugs trigger a program of molecular “suicide” – so-called “apoptosis” – in the cancer cells. All the cells in our body possess this mechanism, which is activated as soon as a cell is severely damaged. Every day, millions of cells die naturally from apoptotic processes – which is crucial for our bodies to function normally. However, cancer cells have founds ways and means to upset the balance between survival and death. Despite aggressive chemotherapy, they manage to suppress apoptosis, which renders them resistant to the drugs. A team of scientists headed by UZH researchers Jean-Pierre Bourquin and Beat Bornhauser from the Children’s Hospital Zurich has now found a way to eliminate these resistant leukemia cells.

Activation of necroptosis causes resistant cancer cells to die off

“Our research reveals that an alternative cell-death program, necroptosis, can be activated in human ALL cells. This enables leukemia cells that barely respond to existing chemotherapeutic drugs to be killed off,” explains Bornhauser, a researcher from the Department of Oncology. The enzyme RIP1 kinase is chiefly responsible for regulating necroptosis. It controls the molecular switch points that govern whether the cell lives or dies. The researchers identified several substances known as “SMAC mimetics”, which activate RIP1 by suppressing the inhibition of the enzyme.

In order to test the efficacy of these SMAC mimetics, the group used a humanized mouse model they developed at the Children’s Hospital Zurich, which enables human leukemia cells to be studied in a living organism. This showed that the leukemia cells in one third of all patient samples tested responded highly sensitively to SMAC mimetics – and died off.

Molecular mechanism decoded with the aid of “gene scissors”

To find out how this cancer-inhibiting effect works, Scott McComb and Julia Aguadé-Gorgorio, the first authors of the study, used the CRISPR-Cas9 method, which is also referred to as “gene scissors”, for the first time in primary human leukemia cells. They discovered that both apoptosis and necroptosis, which are triggered by SMAC mimetics, specifically depend on RIP1 kinase. None of the established chemotherapy drugs activates this RIP1-dependent cell-death mechanism. If the genes responsible for apoptosis were disabled via genome editing, the leukemia cells died due to necroptosis after SMAC mimetics had been administered. If the necroptotic genes were no longer functioning properly, apoptosis led to cell death. Only the simultaneous deactivation of apoptotic and necroptotic genes resulted in the complete resistance of the cancer cells to SMAC mimetics.

Therefore, the simultaneous activation of apoptosis and necroptosis in the cancer cells is responsible for the strong anti-leukemic effect. “SMAC mimetics have great potential to eliminate leukemia cells in patients that aren’t sensitive to established chemotherapeutic drugs. They are effectively a double-edged sword: They kill cells that block apoptosis through necroptosis,” concludes Bornhauser. The researchers are now looking for suitable biomarkers to identify patients who might benefit from treatment with SMAC mimetics in clinical trials.