(jpg, 6.82 MB) Remote sensing of biodiversity: diversity of vegetation of the woods of Lägern near Baden with 44,000 treetops. (Image: UZH) 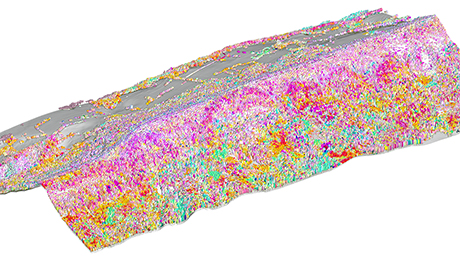 Remote sensing of biodiversity: diversity of vegetation of the woods of Lägern near Baden with 44,000 treetops. (Image: UZH)

Global coordination of research on biodiversity

“Thanks to the top-class and interdisciplinary work within the University Research Priority Program ‘Global Change and Biodiversity’, UZH succeeded in taking over the prestigious office of bioDISCOVERY, which previously had its home in Paris”, says Michael Schaepman, one of the three Co-Directors and Professor of Remote Sensing at the Department of Geography. In line with the objectives of bioDISCOVERY, scientists from the natural sciences, humanities and the social sciences from two faculties and five institutes at UZH carry out research into the interrelationships between biodiversity loss and the global environmental and societal effects.

bioDISCOVERY coordinates research worldwide in three focal areas: strengthening biodiversity assessments, improving observation and understanding biodiversity change as well as improving biodiversity projections. The aim is to progress not only research but also global policy in the field of biodiversity. “Embedding research findings in socially relevant matters by forging a strong link between science and policy is a very important transdisciplinary component of our University Research Priority Program”, explains Co-Director Bernhard Schmid, biodiversity expert at the Institute of Evolutionary Biology and Environmental Studies.

Global hub at the interface of biodiversity science and policy

The third Co-Director of the University Research Priority Program ‘Global Change and Biodiversity’ is Owen Petchey, who also works at the same institute. His specialist field involves the effects of global environmental change on biodiversity and the mathematical modelling of biodiversity changes. According to Petchey, the UZH Research Priority Program makes a central contribution to the core activities of bioDISCOVERY. For example, existing databases for global archives are to be expanded that include the key features of organisms from marine, freshwater and terrestrial realms. In addition, the sustainable use of resources, for example in wooded ecosystems, is to be optimized and the observation and research of endangered ecosystems such as the permafrost-dominated tundra, tropical rainforest or coral reefs will be continued and improved. Another critical task involves refining scenarios and models in order to better forecast the future of biodiversity.

“Thanks to the bioDISCOVERY International Project Office, which will be managed by Cornelia Krug, UZH will advance to the status of global hub at the interface of biodiversity science and policy”, sums up Michael Schaepman.