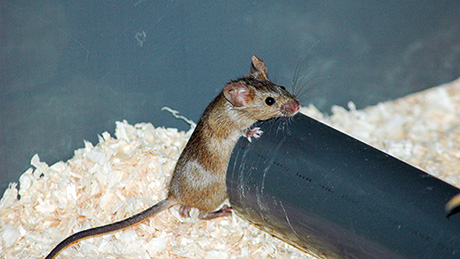 By removing themselves from the group sick mice limit disease spread. (Image: UZH)

Sick wild house mice spend time away from their social groups, leading to a decrease in their potential for disease transmission according to a new study by evolutionary biologists from the University of Zurich in collaboration with the ETH Zurich. The results can improve models focused on predicting the spread of infectious diseases like influenza or Ebola in humans.

When animals get sick, they may change their behaviour, becoming less active, for example. The study’s lead author, Patricia Lopes from the Department of Evolutionary Biology and Environmental Studies at the University of Zurich, says that previous research in wild animals has generally ignored how this change in behaviour may affect social contacts in a group and how, in turn, these changes can impact the transmission of a disease.

Sick mice are not avoided, but remove themselves from the group

To tackle this problem, Patricia Lopes and her colleagues used a novel combination of experimental manipulations of free-living mice, radio frequency tracking of animals, social network analysis and disease modelling. To simulate an infection, mice were injected with lipopolysaccharides (a component of the bacterial cell wall), which results in an immune response and generalized disease symptoms. In a paper published this week in the journal Scientific Reports, the team reveals that sick mice become disconnected from their social groups.

It is known that mice have the ability to detect other sick mice. Therefore, it was surprising to find that the animals in the same social group did not avoid the sick mouse. In fact, they went on interacting with the sick mouse and other mice more or less in the same way as before the experimental infection. “It was the sick mouse that removed itself from the group”, emphasizes Lopes. She suggests that such a change in the behaviour of the sick mouse may protect relatives in the same group from catching the disease, which could be beneficial from an evolutionary perspective.

Speed and extent of disease spread are greatly reduced

In a further step, the researchers used mathematical models to predict how an infectious disease would spread considering the changes in behaviour of the sick animals. “When we account for the behavioural changes and how they affect social contacts, we find that the speed and the extent of disease spread are greatly reduced,” says Lopes.

Ultimately, the study contributes to our understanding of the complexity inherent to disease transmission and highlights the importance of changes in behaviour of sick animals for predicting the outcome of outbreaks. The findings extend to humans, as humans are also known to alter their behaviours when sick. Such effects are possible in a number of diseases spread by social contact where contagiousness overlaps with behavioural symptoms, including influenza and Ebola. Understanding why we feel sick and how diseases spread is a pressing issue, particularly given projected increases in disease outbreak driven by the synergy of climate change, habitat disturbance and human connectivity.