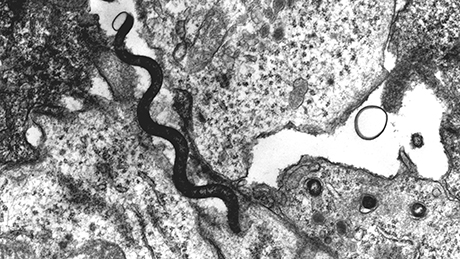 Syphilis has plagued humankind for over 500 years. After the first reported outbreaks struck Europe in 1495, the disease spread rapidly to other continents and swelled to a global pandemic. When treatment with the antibiotic penicillin became available in the mid-twentieth century, infection rates started to decrease dramatically. Strikingly, however, infection with the bacteria Treponema pallidum subsp. pallidum (TPA) has been re-emerging globally in the last few decades; more than 10 million cases are reported annually. Yet the reason for the resurgence of this sexually transmitted infection remains poorly understood.

According to the authors of the paper, little is known about the patterns of genetic diversity in current infections or the evolutionary origins of the disease. Because clinical samples from syphilis patients only contain low quantities of treponemal DNA and the pathogen is difficult to culture in the laboratory, researchers from the University of Zurich decided in 2013 to apply DNA capture and whole-genome sequencing techniques, as used by colleagues at the University of Tübingen, to ancient DNA samples. The team collected 70 clinical and laboratory samples of syphilis, yaws, and bejel infections from 13 countries spread across the globe. Like syphilis bacteria, the closely related subspecies Treponema pallidum subsp. pertenue (TPE) and Treponema pallidum subsp. endemicum (TEN), which cause yaws and bejel, are transmitted through skin contact and show similar clinical manifestations.

By using genome-wide data, the researchers were able to reconstruct a phylogenetic tree showing a clear separation between the TPA lineage and the TPE/TEN lineage. “There have been many questions regarding the origin of syphilis since its appearance on the world stage 500 years ago. By combining an evolutionary and an epidemiological approach, we were able to decipher the genetic relation between strains infecting individuals today, and also trace the emergence of a pandemic cluster with high frequency of antibiotic resistance”, says Homayoun C. Bagheri, former professor at the UZH Institute for Evolutionary Biology and Environmental Studies.

The genomic analyses show the emergence of a pandemic cluster named SS14-Ω, which is present in contemporary infections around the globe and distinct from the cluster comprising the well-studied Nichols reference strain. “Our findings highlight the need to study more extensively the predominant strain type in the contemporary epidemic”, states Natasha Arora, researcher at the Zurich Institute of Forensic Medicine and first author of the study published in Nature Microbiology.

An evolutionary finding of epidemiological relevance is that the SS14-Ω cluster originated from a strain ancestor in the mid-20th century – after the discovery of antibiotics. The worrying aspect of this pandemic cluster is its high resistance to azithromycin, a second-line drug that is widely used to treat sexually transmitted infections. Natasha Arora adds: “The good news is that, so far, no Treponema strains have been detected that are resistant to penicillin, the first-line antibiotic for syphilis treatment.”

Co-author Philipp Bosshard from the University Hospital Zurich is continuing to collect Swiss patient samples in order to further study the clinical aspects of the work. The researchers are convinced that this type of analysis will open new opportunities to develop a comprehensive understanding of the epidemiology of syphilis – a devastating disease that persists to this day, despite the availability of treatment.